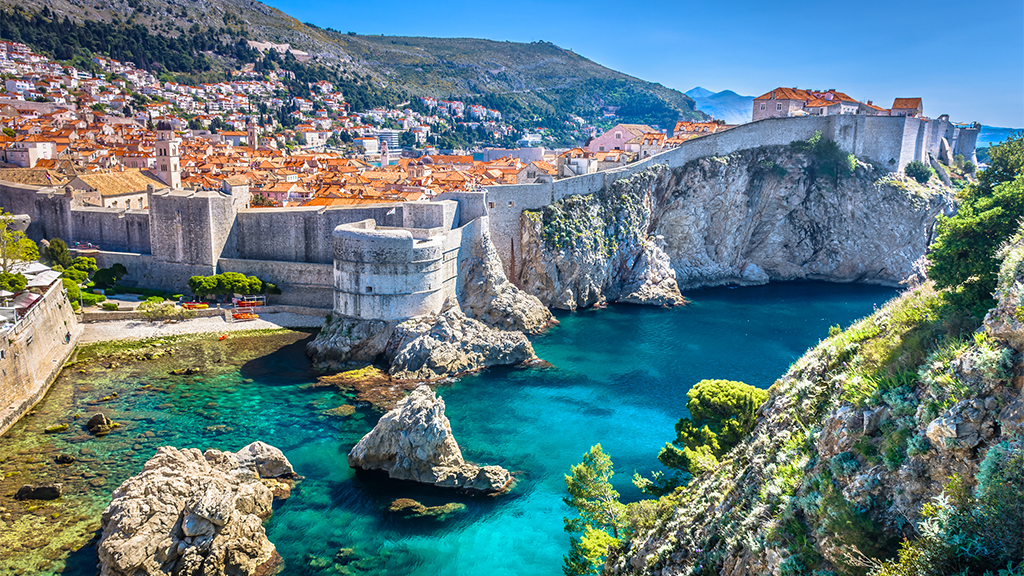 Saying that Croatia is a popular destination is a lot like saying the sun is hot. It’s an understatement of cosmic proportions. Between 2010 and 2018, the country’s annual visitor load jumped from 10.6 million to a whopping 18.4 million arrivals. And it’s showing no signs of slowing. So what is it about this Balkan country that’s attracting swarms of eager tourists? Rich history, exquisite culture and breathtaking natural wonders to name just a few.

The main attractions in this Adriatic gem are the tourist hotspots of Split and Dubrovnik. Featured in the insanely popular Game of Thrones, these former Roman outposts are practically bursting with ancient antiquities. Diocletian’s Palace in Split is like a walled city unto itself, encircling Roman ruins, medieval churches and trendy, modern boutiques. Dubrovnik, on the other hand, IS a walled city whose ramparts span more than a mile around its coastal perimeter. Dotted by defensive fortifications that date to the 13th century, Dubrovnik has been a UNESCO World Heritage site since 1979.

And then, there’s the beaches. The sapphire waters of the Croatian coast are straight out of a fairytale. Ranging from brilliant topaz to deep azure, its crystal-clear depths are a mesmerizing draw for millions of beachgoers each year. But there’s a hidden side to Croatia, a world of secret and secluded treasures just waiting for curious travelers. Let’s jump right in for an amazing countdown of Croatia’s most magical attractions.

1) Plitvice Lakes National Park — Connected by a series of stunning waterfalls, this National Park consists of sixteen sparkling lakes. Deer, wolves, bears, boars and rare bird species populate this UNESCO World Heritage Site situated 90 minutes northeast of Zadar. The park is crisscrossed by a network of quaint and ancient-looking boardwalks that hover over its mesmerizing blue-green waters — perfect for a day of hiking in pristine nature. At Entrance 2, you can catch a free bus that whisks you to the upper lakes or a free boat ride to the lower lakes. Throughout the park, sheer cliff faces are speckled with caves, and depending on its mineral content, the water color varies from emerald to a deep lapis lazuli in color. Wandering amid Plitvice’s natural dams, cascading rapids and shimmering lakes? It’s a bucket-list experience for nature lovers. And you can see it from top to bottom on this once-in-a-lifetime cruise excursion.

2) Historic Treasures of Salona — A twenty-minute drive from the cruise port of Split lies the ancient city of Salona. First mentioned in literature in 119 BC, it was seized by the Romans a mere 41 years later. In Manastirine Park, you can wander among sarcofagi bearing elaborate engravings of Greek gods and Biblical stories. The cemetery was a burial spot for early Christians who suffered persecution at the hands of the Romans, and today it’s one of the religion’s most cherished archaeological sites. Salona’s Episcopal Centre is strewn with the ruins of a 5th-century cathedral, and just across the road, you’ll find the remnants of Roman public baths. But Salona’s most astounding archaeological site is perhaps its amphitheatre. Dating to the second century AD, it housed animal and gladiator fights for up to 17,000 Roman spectators. It could even be filled with water for simulated naval battles! The theater was partially razed by the Venetians in the 17th century to prevent invading Ottomans from taking refuge there. Ready for an odyssey into Croatia’s archaeological past? You can see all this and more on an amazing full-day history tour in Salona.

3) Rijeka — Situated along the Rječina River in the country’s far north, Rijeka traces its origins to pre-Roman times. And if you thought Pisa was alone in its leaning tower glory, think again. Rejeka’s Church of St. Mary of the Assumption has a famously tilted spire that draws onlookers from around the world. Mere steps away, down Rijeka’s winding streets, you’ll discover the medieval Cathedral of St. Vitus. Named after the famous Sicilian martyr, its vaulted ceilings enclose Baroque marble altars and towering stained glass depicting Christian saints. At vibrant Kolber Square, lively merchants hawk their wares. And no visit to Rijeka would be complete without a trip to Pivnica Cont, the town’s most illustrious restaurant. It’s the perfect backdrop for a few frosty Croatian beers and chowing down on authentic fish or ox goulash. If this medieval enclave sounds just your speed, you can see it all on one low-cost tour. 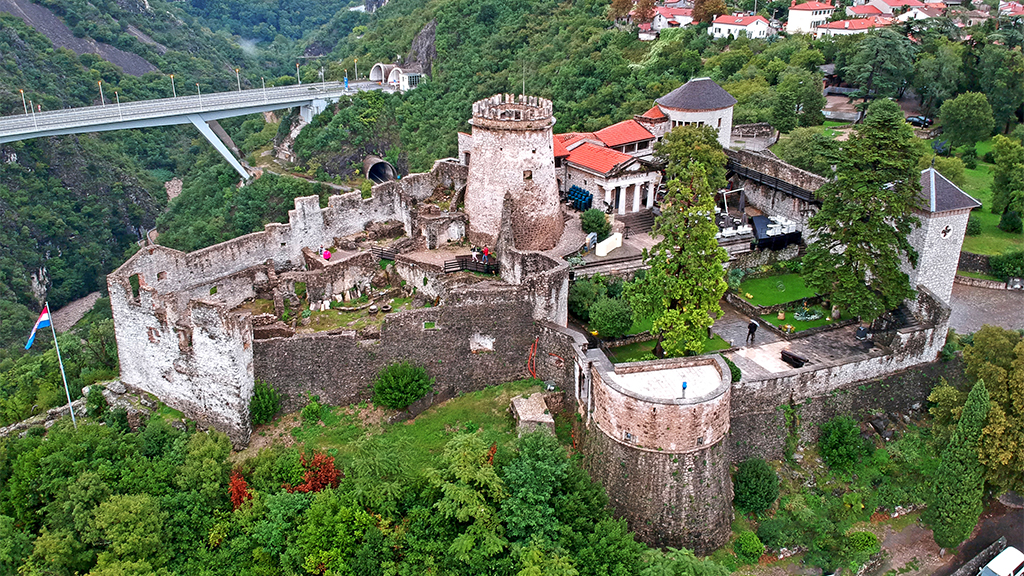 4) Opatija — Sprawling between the jagged coast and emerald hills of the north Adriatic, Opatija was an elite resort town during the Austrio-Hungarian Empire. Today, that history is reflected in the elegant villas dotting this coastal city across the bay from Rijeka. Known as the Pearl of the North Adriatic, Opatija played host to world-famous writers and socialites including Lord Byron, James Joyce and Isadora Duncan. Locals and tourists alike delight in the city’s eclectic mix of building styles. Baroque, Rococo and Art Nouveau structures weave a rich architectural tapestry unlike any other place on earth. On a one-of-a-kind tour, you can explore the city’s public gardens and the gorgeous Lungomare promenade overlooking the Adriatic’s translucent waters. While you’re there, don’t forget to check out Trsat Castle, a 13th-century fortress just a few minutes down the coastline.

5) The Golden Isle of Krk — Beckoning just off Croatia’s western coast, the Isle of Krk is known as the cradle of Croatian civilization. And in your wildest dreams, you couldn’t conjure a more fantastical paradise. Rising from the turquoise waters of the Adriatic, medieval structures scale the mountainside, culminating in a Gothic bell tower that dominates the skyline. On a relaxing cruise excursion from Rijeka you can explore its meandering alleyways, where whimsical, patio cafés serve the island’s famous Žlahtina wine. The grapes are found nowhere else and pair perfectly with the island’s celebrated sheep cheese. Spelunkers can prowl among the otherworldly stalactites of Biserujka cave, while sunseekers can relax at the bars and beaches that line Krk’s sunny coast. It’s truly the stuff of fantasies.

6) Medieval Stone Villages of Istria — The longest peninsula on the Adriatic Sea, Istria is home plentiful stone village. Legend has it they were built by giants, and it’s not hard to see why. Nestled atop the Balkan hills, they resemble the handiwork of a colossal race. On an excursion from Rejika, you can set off in search of these mythical villages. Start your journey in the “world’s smallest town” of Hum. But don’t let the name fool you. This tiny town is big on gastronomy, especially truffles, which grow in abundance. You’ll also want to try the Biska, a traditional Istrian brandy made from a 2,000-old recipe. Just down the road, from Hum you’ll discover Motovun, a hilltop fortress city. Known as the “Tuscany of Croatia” it’s known for exquisite local wines, and (you guessed it!) abundant truffles. Next, it’s on to the port city of Rovinj. This coastal town has all the charm of Dubrovnik minus the maddening crowds. Sparkling beaches, medieval architecture and narrow back alleys make Rovinj the undisputed jewel of Istria. 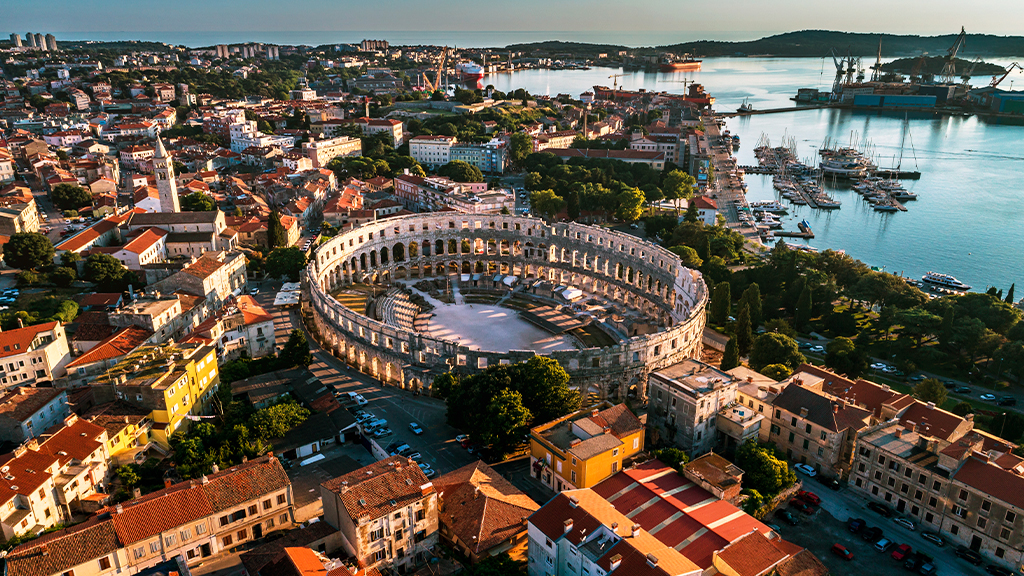 7) Pula — Ensconced at the tip of the Istrian peninsula, Pula is strongly influenced by Italian culture. Here, you’ll experience lavish Italian gastronomy with a distinctly Croatian twist. Istrian prosciutto, sumptuous fish stew and Croatian risotto are just the beginning. Perhaps it’s no mystery that Pula bears the imprint of its Italian neighbors. A short ferry ride from neighboring Venice, it has the best-preserved Roman ruins outside Italy’s borders. In the center of town, the Pula Arena is the best preserved Roman amphitheatre on the planet. It’s accompanied by the Triumphal Arch of the Sergii, Hercules’ Gate and the Temple of Augustus to name a few. Coastal cafes, laid-back bars and the Old Town Square offer endless possibilities for cruise enthusiasts. Needless to say, Pula is definitely worth checking out.

Disembark Your Vessel,
and Embark on a Croatian Adventure.

Cruise excursions are one of the most affordable and accessible ways to explore the hidden treasures of Croatia. With prices up to 40% lower than the cruise lines and a Price Match Guarantee, Shore Excursions Group guarantees the absolute lowest prices — from Dalmatia to Istria and beyond. Plus, you get the peace of mind of 24/7 traveler support anywhere in the world. When it’s time to embark on your next Croatian adventure, start your search with Shore Excursions Group.