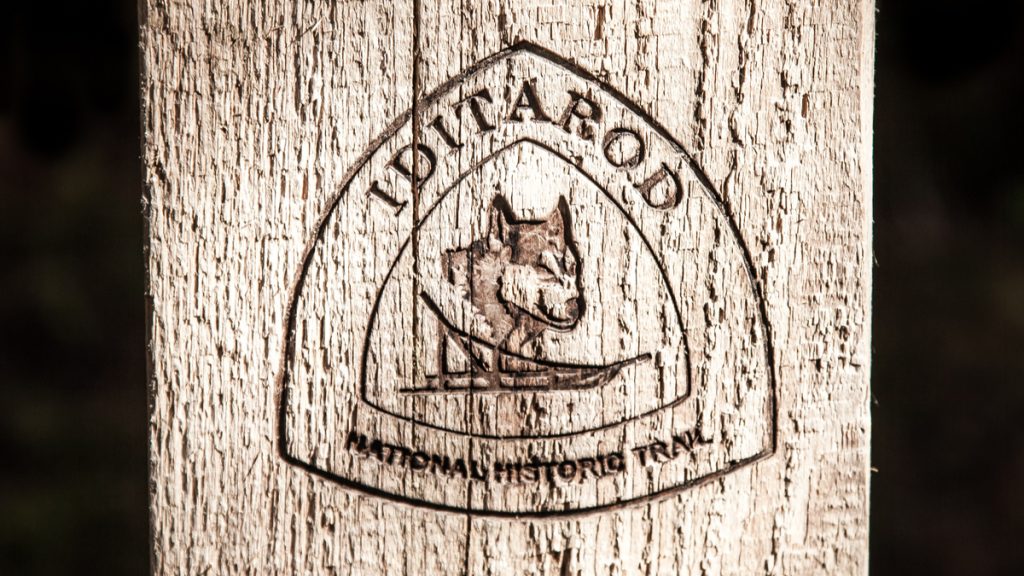 The Alaskan Iditarod is a test of endurance steeped in a colorful legacy. Picture the Iron Man Triathlon, Tour De France and Olympic speed skating rolled into one. Throw in blinding blizzards, aggressive moose and paper-thin ice, and you’ve got “The Last Great Race on Earth.” So what’s all the hubbub about this 1,000-mile race against the elements? Let’s dive in and explore the awesomeness of the Alaskan Iditarod.

Covering vast stretches of snow-packed tundra, the storied race draws its name from an Inuit word meaning “I did it, Rod!” But seriously, no one knows what the weird-sounding utterance means. Various accounts attribute it to Ingalik and Holikachuk words meaning “distant place” or “clear river.” And both are perfectly apropos.

Running from Anchorage in southern Alaska to Nome on the Bering Sea coast, the route is chock-full of treacherous terrain and hair-raising hazards. Frozen rivers, ice overflows, and perilous forest accompany endless hours of darkness and fearsome climbs. This is nature at its cruelest — the perfect backdrop for the ultimate test of the human spirit.

The Iditarod’s origins traces back to the mail and supply routes of the Klondike Gold Rush. Back then, the Iditarod Trail ran from the coastal towns of Seward and Knik straight into the heart of gold country. The trail evolved into a major gold transit route to the impenetrable Alaskan interior. Then came the diphtheria outbreak of 1925, and the legend of the Iditarod Trail was born.

In January of 1925, the lethal respiratory disease ripped through boomtown of Nome. Children were dying, and an epidemic was imminent. Sensing the dire urgency of the outbreak, the town’s lone physician, Dr. Curtis Welch, radioed for a life-saving supply of diphtheria antitoxin. With the frozen harbor blocking sea travel and sub-zero temperatures barring open-cockpit planes, there was just one option. Alaska’s Governor, Scott C. Bone, organized “The Great Race of Mercy.”

Over five-and-a-half days, 20 mushers and 150 sled dogs relayed the serum through biting winds and over fragile ice flows to save the town of Nome. When the lead dog Balto led the final team into town, he became nearly as famous as Rin Tin Tin. To this day, a statue honoring Balto stands proudly in New York’s Central Park.

Rising from the Ashes

The glory days didn’t last long, however. In Alaska’s interior, the end of the gold boom spelled the beginning of the end for dog mushing as a dominant form of transportation. Soon, airplanes were carrying mail, and the snowmobile eventually supplanted the dog team. Then something amazing happened.

In 1964, the Wasilla-Knik Centennial Committee was established to celebrate Alaska’s 100th year as a U.S. territory. Its chairwoman, Dorothy G. Page, dreamed of resurrecting the dying tradition of dog sledding. Together with Joe Reddington, a local hunting guide and dog-sledding enthusiast, she embarked upon a mission to resurrect the ancient tradition.

After meeting with Dorothy, Joe and his wife Violet returned to their homestead in Knik and raised a $25,000 purse for the first race — and the Iditarod Trail Sled Dog Race
was born. The first race was run in 1968, and after a spate of financial troubles and negative publicity, the event became the largest sled dog race in the world.

Joe eventually completed 17 races and earned the title “Father of the Iditarod.” Dorothy, for her visionary work, became known as its mother. To date, over 400 mushers from 13 countries and 20 U.S. states have completed the famous race. 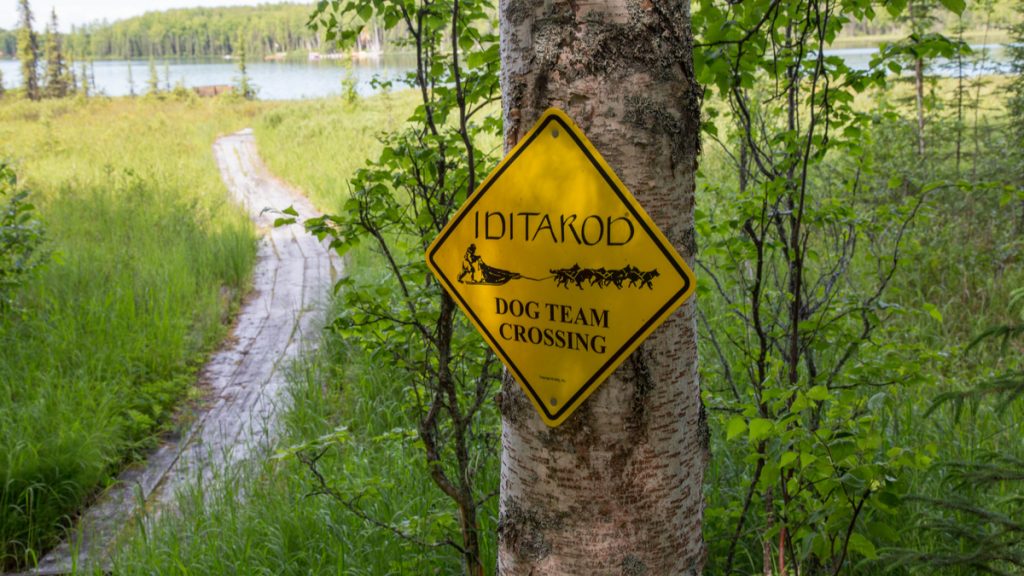 As one of the world’s most illustrious sporting events, the Iditarod has evolved into a highly competitive race. Dog teams consist of between 12 and 16 dogs, with top teams costing between $80,000 and $100,000 per year to maintain. The dogs themselves are bred to withstand the brutal conditions of the race. And their conditioning is no joke.

On the frigid trail, Alaskan huskies burn nearly 12,000 calories per day, approximately 3.5 times that of a Tour de France cyclist pound-for-pound. The dogs’ aerobic capacity is a ridiculous 240 milligrams of oxygen per kilogram, roughly three times that of an Olympic marathon runner.

But how do they do it? Why don’t their muscles and stamina break down over the course of the race? For nearly two decades, researcher Mike Davis from Oklahoma State University has been studying exactly that. His discoveries are pushing the envelope of sports science.

During the first day or two of running, the dogs’ metabolic profile mirrors that of humans. Soreness and lactic acid build-up set in, taxing their stamina and muscle strength. Oxidative stress, muscle break down and depleted energy reserves begin to impair performance. Then, an extraordinary metabolic change occurs. The dogs switch from burning glycogen (like humans) to burning stored fat exclusively. Which means no lactic acid build-up, no soreness and no fatigue. Within days, the dogs can run an average of 100 miles per day with no sign of fatigue — and their performance actually improves.

“You take dogs out and you run them 100 miles per day today and tomorrow and the next day, and they come back, sleep, eat, do it again without having any outward sign of it mattering,” Davis said. “There’s a good argument that nothing prepares a dog better for a 1,000-mile race than a 1,000-mile race. They can do it indefinitely, as long as you have a trail and they’ve got food. They get tired, but they don’t fatigue in the biochemical sense.” The research is so promising, the U.S. Department of Defense is funding research on how the process can be initiated in humans — allowing soldiers on the battlefield to “work like a dog.”

Over the years, Iditarod mushers have suffered broken bones, amputated digits, attacks from animals and people, and sealed eyelids from the biting cold. Mushers regularly hallucinate after staying up for days, and frostbite is an ever-present danger. But the rewards are beyond worth it. Immersed in pristine snowscapes under the glow of the Northern Lights, riders connect with nature in a whole new way. “There’s a whole lot of heaven out there,” said musher, Scott Janssen.

Heaven. That says it all, doesn’t it? 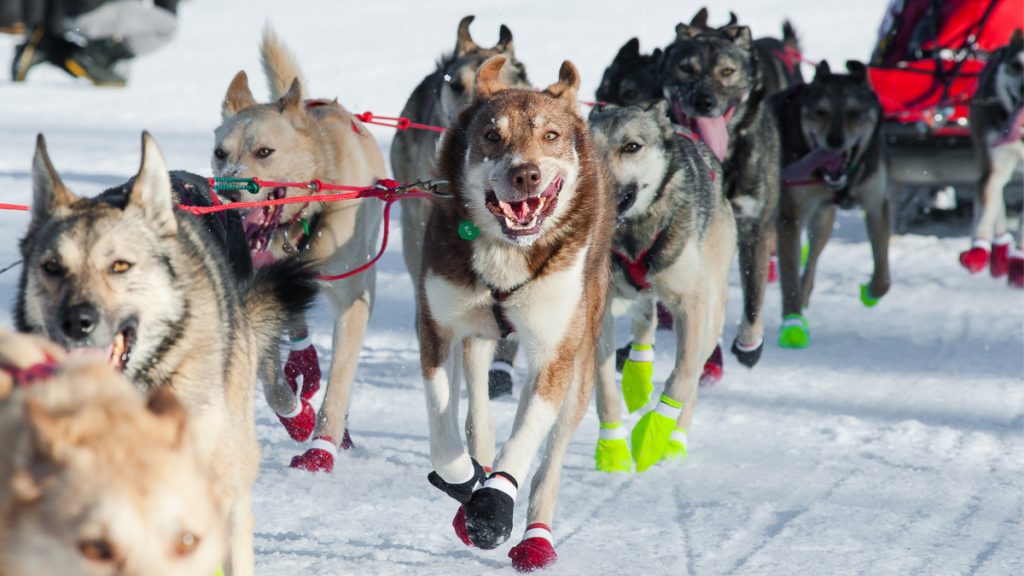 Ready for a Dog Sledding Adventure?

Sure, the Iditarod Trail Dog Sled Race isn’t for everyone. You have to be slightly insane to mush through 1,000 miles of treacherous tundra. But that doesn’t mean dog mushing is out of your reach. On your next Alaska cruise, try your hand at dog sledding with a once-in-a-life tour from Shore Excursions Group.

In Skagway, you’ll board a helicopter for a heart-pumping ride to a real dog-mushing camp. Your experienced pilot will fly you over massive ice formations, deep-blue crevasses, and shimmering ice rivers while pointing out the stunning views out each window. Upon landing, glacier-carved peaks open up before you as you approach hundreds of sled dogs, pups, and staff at the dog sled camp on the Denver Glacier.

At the dog camp, the professional staff will provide you with training and instructions on the finer points of dog sledding, stories about the famous Iditarod race, and a chance to drive the team yourself. Or, just relax on the sled while enjoying breathtaking surroundings as huskies power you through the crisp Alaskan snow.

Your Skagway shore excursion continues with some time to talk with the mushers and play with the 200 or so sled dogs and their husky puppies. Before your helicopter takes you back to civilization, make sure to get some pictures with the Alaskan sled dogs on their snowy home turf.

Are you up for the challenge? Book your dog-sledding adventure while seats are still available. This is one Alaskan adventure you’ll remember for the rest of your life!