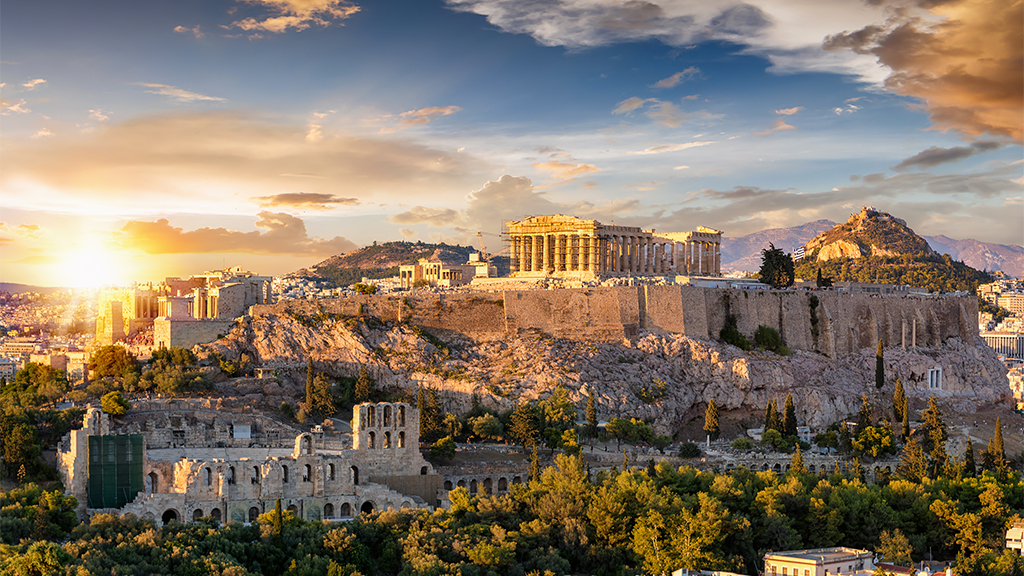 Oozing with culture, jam-packed with history and bursting with natural wonders, Greece is a paradise for cruise travelers from around the world. This is the motherland of proud Odysseus. A mecca of fertile vineyards and succulent olive groves. A sun-splashed oasis for laid-back beachgoers. More than anything, Greece is a magnet for adventurous spirits. No wonder it’s home to the world’s most sought-after cruise getaways. When you’re planning your next voyage, put these seven bucket-list destinations on your Greece itinerary:

1. Athens — Let’s kick things off with the undisputed superbeast. Athens, as they say, is the granddaddy of them all. This birthplace of modern civilization was settled between 7,000 and 5,000 BC. The capital of the ancient world, it’s the planet’s singular destination for culture buffs and history aficionados. From the Parthenon to the Agora, no city is packed with archaeological riches quite like Athens. But this ancient city is also packed with modern buzz. In the trendy district of Plaka, narrow streets zigzag in a maze of shops, cafes and vibrant markets. In the buzzing neighborhoods of Psirri and Monastiraki, nightlife and gastronomy are the name of the game. Music and dancing fill the air after dark, and even the humblest bistros stay humming until 3:00 AM. And all along the coast, seaside restaurants serve up rich harvests of from the Mediterranean’s prolific waters. For a special treat, take a walking food tour. Be sure to try to the Spanakopita… and wash it down with a traditional shot of ouzo.

2. Corfu — In the northwest hinterlands of Greece lies the legendary island of Corfu. Straddling the coast of Albania, it was branded a Top-10 European Island by Travel and Leisure in 2018. When you see its cobalt-blue waters lapping endless, idyllic beaches, you’ll know why. But beach life is just the start of the world’s love affair with this Ionian paradise. This island is filled with fascinating wonders — like the geological marvels of Cape Drastis, where sheer, dramatic cliffs jut impossibly into the sea. Or the old town of Corfu City, a UNESCO World Heritage site where you can visit a Venetian fortress, stroll the buzzing Liston promenade or visit the Agios Iasonas Kai Sosipatros, a 10th-century Byzantine Church dedicated to the disciples of the apostle Paul, who preached Christianity on Corfu in the first century AD. Before you depart, visit the Achilleion Palace. Built by Elisabeth of Bavaria, the one-time Empress of Austria, it was purchased by German Emperor Kaiser Wilhelm and used a center of diplomacy and retreat.

3. Rhodes — Off the Southern tip of Turkey lies Rhodes, where an eclectic mixture of civilizations exist side-by-side. Rhodes is home to the largest living medieval town in Europe. The city’s acropolis was built by the Greeks in the 5th century BC and fortified as a Byzantine outpost in the 7th century AD. Today, over 30 magnificent Byzantine churches are scattered in the Old Town. For a taste of Byzantine style, our Lady of the Castle is the church to visit. The Knights of St. John arrived in 1309, transforming the city into an impregnable Christian outpost with stunning architectural gems — including the Palace of the Grandmaster. This sprawling castle complex features spectacular vaulted ceilings, priceless Asian vases, Greek and Roman statues, and Hellenistic, Roman and Early Christian mosaic floors. Suleiman the Magnificent took the island 16th century AD, bringing with him the rich culture and architectural style of his Islamic empire. Today, the old town is dotted with ancient mosques, including the Suleymaniye Mosque, a jaw-dropping, rose-colored masterpiece with a minaret that dominates the Rhodes skyline. If you’re fascinated by the interwoven cultures of the Mediterranean, Rhodes is not to be missed. 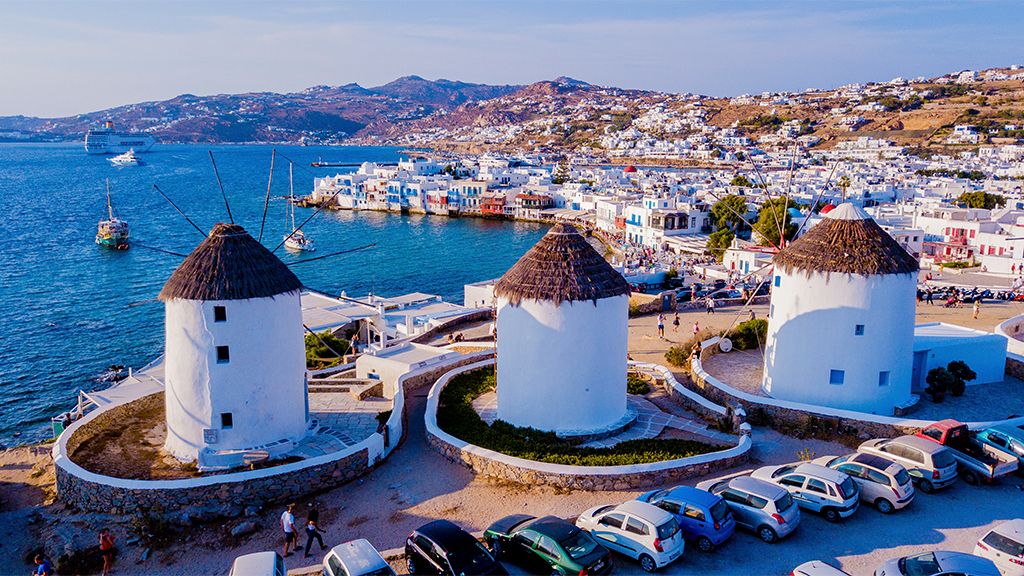 4. Mykonos — Welcome to the party paradise of the Agaean. Mykonos is a beach-lover’s dream with crystal-clear waters and a prolific abundance of bars, clubs, and thumping discotheques. But the Ibiza-style party atmosphere isn’t the island’s only draw. Start your visit in the quarter of Little Venice, where whitewashed edifices rise from the sea’s lapping waves. Here, you can shop, dine and grab a drink on picturesque patios and boardwalks that extend over the surging tide. At Kato Mili, you can view a charming collection of 16th Century Venetian windmills. Matoyianni Street is your destination for shopping and Instagram-perfect photo ops. And to escape the tourist hordes, head for the inland village of Ano Mera, where the laid-back pace lets you experience the island vibe like a local. If you want to experience ancient culture and artifacts, grab a ferry, and head for the mythical island of Delios, the legendary birthplace of Artemis and Apollo.

5. Thessaloniki — Greece’s second-largest city is the capital of Greek Macedonia. Perched on the shores of the Thermaic Gulf, this vibrant hub is the country’s cultural, gastronomic and entertainment capital. No wonder it has more bars and cafes per capita than any other city in Europe! Sample the sumptuous local fair at Tsinari Square, where the mezethedes are world-class. Mezethedes are small plates of savory foods served to accompany drinks. Order yours with Loukaniko (Greek sausage), Sardeles Pastes (raw sardines cured in lemon) or Kefthedes (small, fried balls of lamb, pork or vegetables). Looking for history and culture? UNESCO lists Thessaloniki as an “Open Museum of Early Christian and Byzantine Art.” That’s right, the ENTIRE CITY is a museum. Soak it up at The Rotunda and Arch of Galerius. Built as a Roman imperial palace, it was consecrated as a church under Constantine. Under the Ottomans, it became a mosque, and later a Greek Orthodox Church. It’s minaret has been painstakingly preserved. It’s a testament to culture and architectural history of Greek, paleochristian and Islamic culture. While you’re there, don’t miss the Byzantine Baths, Ottoman Fortress and Archaeological Museum of Thessaloniki, which traces the history of Macedonia from prehistory through late antiquity. It has a dazzling collection of ancient treasure you won’t want to miss.

6. Páros — In Travel and Leisure’s Top 10 Islands to Visit in Europe, Páros made it all the way to Number 1. Why such high praise? Páros is like Mykonos without all the tourists. It gives cruise passengers a chance to experience authentic Greek culture without being trampled by crowds of holidaymakers. Parikia is the island’s main port, and it’s the perfect place to get lost for a day. Amid a tangle of whitewashed lanes and narrow alleys you can explore a maze of restaurants, taverns, cafes, and bars. For some history, visit the third-century Panagia Ekatontapyliani, or “church of 100 doors.” Legend has it that only 99 doors have been found, and the last one will be discovered when the Greeks take Constantinople back from the Turks. For a gastronomical adventure, visit Reepublic Espresso Bar. Rather than ordering cocktails off the menu, the waiter interviews you about your preferences and returns with the perfect cocktail. And of course, there are the beaches. Páros is blessed with clear, pristine waters and copious, immaculate waterfront. If you’re craving a laid-back, authentic Greek experience, Páros is the place to be. 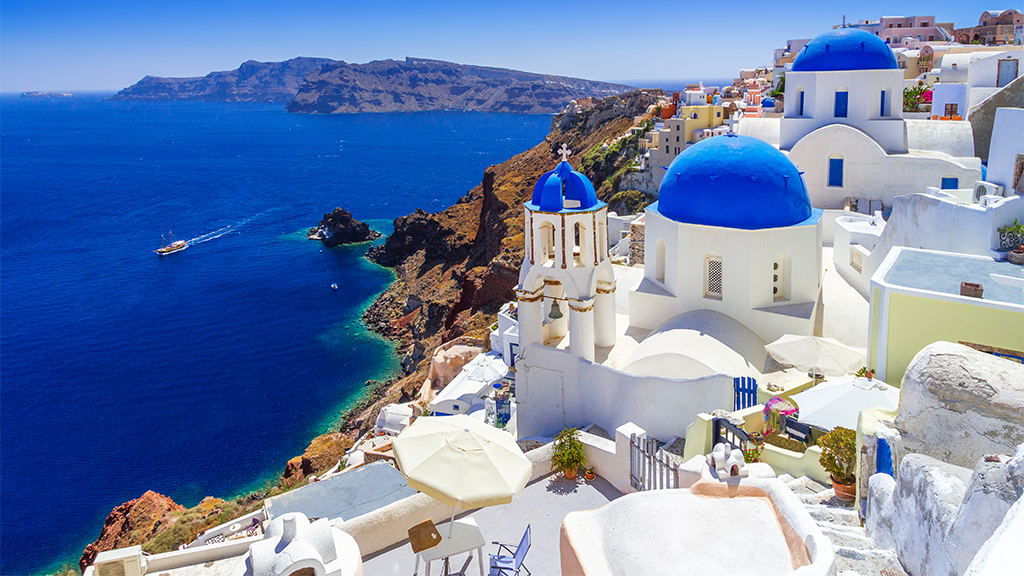 7. Santorini — Perhaps no Greek island (or ANY island) is more recognizable than Santorini. The island is situated on a volcanic caldera, giving it the shape of a donut — with a few bites taken out. This makes Santorini the most visually striking of all the Greek islands. In its principal cities of Fira and Oia, whitewashed facades stairstep dramatically from the sea. Fira is the capital and largest city of the island. In Oia, blue-domed churches have become the Santorini’s iconic trademark, shown on postcards and Instagram posts worldwide. In these two cities, you’ll find all the restaurants, bars and shopping you can handle. But the real attraction is the wine. With volcanic soils and unique mineral content, Santorini is the Napa Valley of Greece. Assyrtiko is the most popular variety, and you can grab some at the Estate Agyros winery, recognized as one of the world’s finest wineries by Wine and Spirits Magazine. If you’re up for some history, check out “Santorini’s Pompeii.” The ancient Minoan city of Akrotiri of Thera was unearthed in 1967 after more than 3,000 years buried in ash. Its well-preserved frescoes, roads and houses are under continual excavation and are open to the public.

History, culture or paradise?
In Greece, there’s no need to choose.

If you could sail to one county in your entire life, Greece would be the choice. Hands down. With decadent gastronomy, vibrant nightlife, ancient history, eye-popping geology and beaches galore, there’s something for literally everyone. In Homer’s famous epic, Odysseus had himself tied to the mast of his ship to keep him from answering the siren song of the Greek isles. Today, the siren song of Greece beckons you. The question is, will you answer?