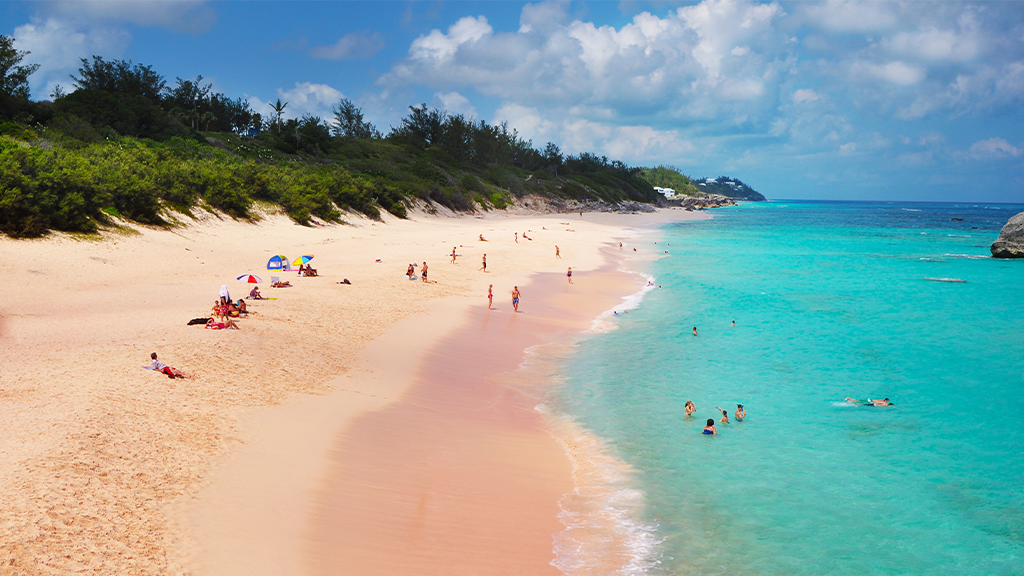 Ever seen a pink sand beach? Then you haven’t been to Bermuda. Tucked 650 miles to the east of Cape Hatteras, this Atlantic paradise is a nirvana for adventurous souls. The island was first discovered by European explorers when the English vessel Sea Venture shipwrecked on its sparkling shores. Today, old colonial architecture blends with modern design on its bustling avenues, an homage to the rich history of this legendary locale. Lush vegetation crowds the island’s shoreline and interior, imparting a distinctly tropical ambiance. No wonder Bermuda found its way into 1,000 Places to See Before You Die, a New York Times #1 Bestseller and guidebook of the planet’s most savvy travelers. Check out these amazing reasons to drop everything and go there now!

1. The Bermuda Triangle — Will you vanish inside a wormhole? Get abducted by little green men? Enter a secret dimension populated by robot overlords? Unlikely. But under the twinkling stars of the Bermuda Triangle, you WILL see exotic lifeforms. On the nighttime wharf cruise, you can gaze at colorful ocean creatures in an amazing glass-bottom boat. Exotic fish, neon coral and curious sea turtles glow under the powerful lights of the ship. Admire the clever cuttlefish, behold gracious (and voracious) shark species. Marvel at diverse ecosystems as your lively guide explains the mysteries of the deep. Bermuda is famous for its nightlife but the nightclubs have got nothing on this.

2. Crystal and Fantasy Caves — Bermuda’s mystique draws visitors from across the globe. But deep beneath the earth lies another hidden secret — the Crystal and Fantasy Caves. These spectacular underground caverns plunge up to 120 feet below sea level. Inside, you’ll find glittering crystal formations, shimmering stalactites, and the luminous azure waters of an underground lake. A floating bridge bobs on the lake’s surface, guiding you across its mesmerizing depths and revealing geologic formations you can’t see anywhere else. These subterranean gems are a can’t-miss for adventurous travelers in Bermuda. 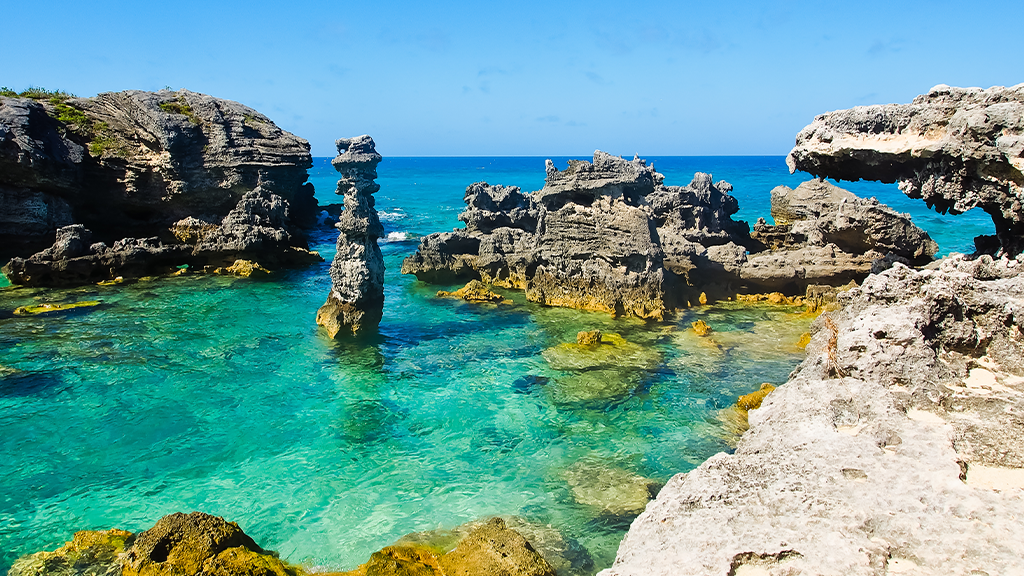 3. Snorkeling at Tobacco Bay — Speaking of crystal-clear waters, Tobacco Bay has it in spades. Known for its towering limestone formations, this beloved Bermuda beach is the perfect spot for exploring the island’s prolific ocean life. Thanks to its spectacular allure, this pristine natural attraction is designated as a national park but you can still let your hair down. At the nearby restaurant, Bonfire and Bohemia, you can grab an adult beverage and savory snacks. And during the summer, you can cozy up next to a roaring bonfire as waves lap the pink sand beach. Of all Bermuda’s world-class beaches, Tobacco Bay ranks right at the top. Now that’s saying something!

4. The Carribean’s best golf — Okay, Bermuda doesn’t have the Caribbean’s best golf. Because Bermuda ISN’T IN THE CARIBBEAN. That said, this tiny island has more courses per capita than any place on Earth. Tee up the perfect afternoon at Belmont Hills on a day tour from your cruise ship. The 6,100-yard course features dramatic bunkers and compact fairways that’ll put any linksman (or linkswoman) to the test. Panoramic backdrops showcase the island’s beauty while challenging your skills. Sure, the sand traps are treacherous but the greatest hazard are the sweeping ocean views that distract you from your shot. As you head to the first tee, beware: after a day at Belmont Hills, you’ll never look at your local course in quite the same way.

5. Twizies and Scooters — Bermuda is a teeny-tiny island — way too small for fleets of rental cars. Thank goodness! Because that means you can explore the streets on a scooter or a cutting-edge Twizy. Scooters have long been the favorite mode of transportation for tourists and cruise passengers. With the sun on your skin and wind in your face, you can explore the nooks and crannies of this exotic paradise. Not sure about balancing a scooter? Try a Twizy. These fantastical electric vehicles are like souped up golf carts — from the future! Jump in one of these sleek, shiny electric vehicles from Renault and hit the road on a tropical adventure.

6. Amazing Food — Bermuda is more than 850 miles from the nearest Caribbean island (Great Abaco, if you’re keeping score at home). Over the centuries, it’s developed a local cuisine all its own. Start your culinary odyssey with some curried mussel pie. Traditional curry ingredients are mixed with minced mussel meat (say that five times fast), then cooked into a traditional pie shell and served with mashed potatoes. Diced shark hash is another savory local favorite. Shark steaks are mixed with fresh herbs and peppers, then served over bruschetta or inside a fried roll. And don’t miss the traditional codfish breakfast. This hearty plate is heaped with boiled & salted codfish,tomato and onion sauce, boiled potatoes, hard-boiled egg, bananas and avocado slices. Seafood for breakfast, lunch and dinner? It’s not heaven. It’s Bermuda.

7. Cliff Jumping — Jonesing for an adrenaline rush? Try plunging from sheer cliffs into Bermuda’s turquoise waters. During the summer, cliff jumping is a favorite pastime for Bermuda’s local youth. And Admiralty House Park is the island’s cliff-jumping Mecca. When you arrive, ask the locals to point you to “Canon.” It’s an arch-like rock formation permeated with a labyrinth of caves. Swim out, climb the hand-cut rock stairs and ascend your way through the tunnels. The precipitous jumps here range from 20 to 40 feet in height. It’s definitely not for the faint of heart, but the warm, crystal-clear waters below make this heart-pumping plunge worth the journey.

8. Amazing Spas — As you debark the narrow confines of your ship, it may be time to refresh and recharge. Bermuda has a vast assortment of local spas, but The Caves at Grotto Bay Beach Resort take the cake. Nestled in a limestone cave, this one-of-a-kind attraction features cabanas that float on a crystal-clear subterranean lake. Surrounded by stalactites and stalagmites, you can soak up a deep-tissue massages and let your worries melt away. Getting a cucumber facial on a spelunking adventure? Only in Bermuda, baby.

9. Travel Back In Time — You don’t need a flux capacitor to feel the echo of a storied history as you meander among the naval and military forts of the island. Once named “The Gibraltar of the West”, Bermuda was a British military stronghold during the American Revolution and War of 1812. Chief among these historic outposts is Fort St. Catherine. This massive, spectacular complex soars above pristine beaches on an outcropping that juts into the aquamarine waters of Achilles Bay. Erected in 1614, the fort contains an underground maze of tunnels and chambers where British troops wielded canons against pirates and foreign enemies. Subject to continuous upgrades well into the 19th century, today it features a fascinating antique gallery and museum, where you can explore the military history of this Atlantic gem. 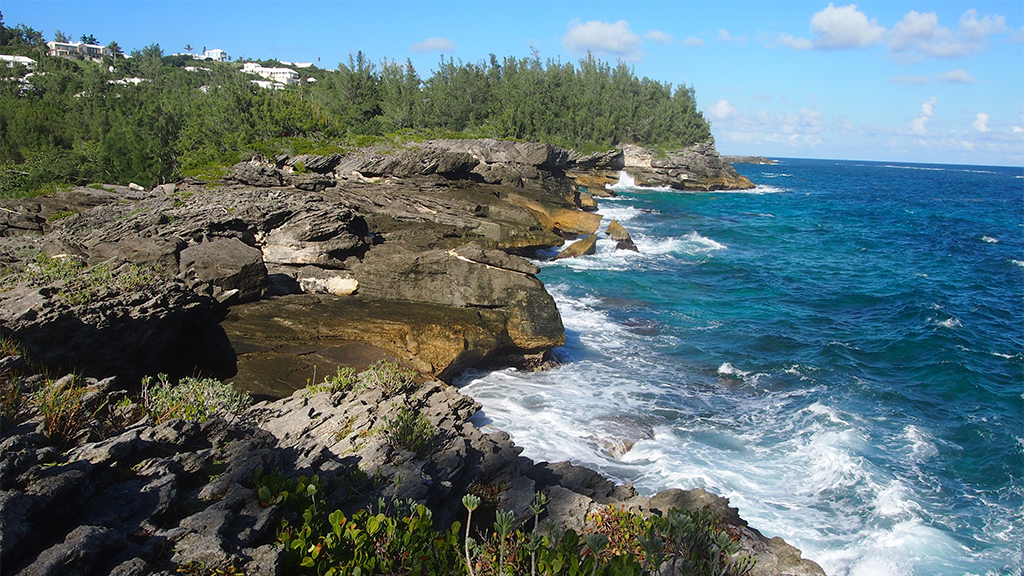 10. Breathtaking Natural Beauty – Packed with mangroves, exotic birds and ancient grottos, Bermuda offers a treasure trove of gorgeous nature preserves. Birdwatchers flock to Spittal Pond Nature Reserve, where migratory shorebirds and waterfowl congregate. More than 500 species frequent the preserve, including American redstart, blue-winged teal, green egrets, and black and white warblers. While you’re there, wander among the zigzagging trails through the area’s ancient limestone formations. Silver-haired bats, colorful Sally Lightfoot crabs, and critically endangered rock skink lizard can be seen prowling among its 64 acres. This rainbow-colored menagerie is a delight for nature lovers, and if you visit the island in spring, you might eye spy humpback whales migrating just offshore!

Drop the briefcase. Drop the lunch pail.
Drop EVERYTHING, and pack your bags.

If Bermuda isn’t on your bucket list, you need a new bucket list. Or at least some serious revisions. This tropical wonderland offers enthralling attractions for travelers of every type. From sprawling beaches to abundant wildlife to history, culture and laid-back recreation, there’s no place on earth quite like it. Overwhelmed by endless to-do lists, responsibilities and obligations? Drop your worries. And head to Bermuda.